Brand Luther: How an Unheralded Monk Turned His Small Town into a Center of Publishing, Made Himself the Most Famous Man in Europe—and Started the Protestant Reformation 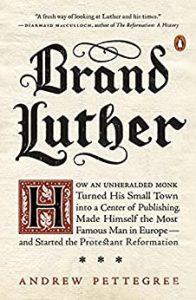 Andrew Pettegree is Professor of Modern History at the University of St. Andrews, where he was the founding director of the St. Andrews Reformation Studies Institute. He is the author of a number of books on the Reformation and the history of communication.

With all that ink spilled, all that research performed, all that paper printed, is it even possible to look at Luther and the Reformation from a fresh perspective? Andrew Pettegree’s Brand Luther does exactly that. This book has been described as “the best new contribution to Luther scholarship in recent history”1 and rightly so. In Brand Luther, Pettegree brings together his expertise in Reformation and communication history to provide the reader with a unique perspective on the Reformation.

Brand Luther is not a typical biography of Martin Luther. Instead Pettegree takes the reader through the life of Luther, the life of Wittenberg, and the development of the Reformation all from the unique perspective of the printing industry. This makes Brand Luther a rare gem in Reformation studies.

Pettegree breaks down the history of Luther and the Reformation into four major parts. Part I. A Singular Man provides background on Wittenberg, Luther’s life prior to the posting of the 95 Theses, and the indulgence trade. Some may be surprised to find out that there was nothing remarkable about little Wittenberg at the time of Luther’s arrival. Luther himself described Wittenberg as “on the edge of civilization.” (7)

The printing industry had no reason to pay attention to Wittenberg. At the time of Luther’s arrival, Wittenberg had only one printing press. A printer with limited ability ran  the printing press for the university’s use. Yet “within the next fifty years Wittenberg would defy all the rules…and become a center of the book world…almost entirely due to Martin Luther…” (11)

In his examination of Luther’s early years leading up to late 1517, Pettegree does Reformation historiography justice. He examines some of the more well-known conclusions that have developed in recent decades, as well as some of the depictions that have persisted over the centuries. He then evaluates their validity and historicity in light of current scholarship. For example, in his description of Luther’s early home life, Pettegree writes, “…Attempts to interpret the crucial turning points of Luther’s life as a reaction against a cold and distant father, or mother, tell us more about the era in which they were written (the 1960s and 1970s) than about Luther. Martin was conscious that he came from a loving home; he honored his parents and in turn would be a devoted and doting father.” (30).

Along these same lines, Pettegree provides an excellent defense of the historicity that Luther did indeed post ninety-five theses on indulgences in late October 1517. He does so by examining how the printing industry responded to Luther’s theses. Dissertation theses never attained a sufficient audience to merit further publication beyond the university where the disputation took place. “In Luther’s case, his theses on indulgences were reprinted three times, in three separate cities, including one…that did not have a university” (75).

In Part II. The Eye of the Storm, Pettegree helps the reader to understand the frenetic nature of Luther’s life and work during the period from 1517 to 1530, a time when Luther became the engine of the powerful printing industry that developed in Wittenberg, pumping out major works, essays, responses, pamphlets, and Bible translations. As he lays out the major events in Luther’s life at this time—Heidelberg Disputation, debate with John Eck, Diet of Worms, seclusion at the Wartburg, Pettegree parallels how each of these events and Luther’s various writings transformed the printing industry. He demonstrates how Martin Luther was really the first person of the modern era to harness “social media” to get his message out to the world and in doing so he made history.

One of the main reasons for this was the development of what the author describes as “Brand Luther”—a certain look, typography, and style that was used for Wittenberg writings, a brand developed under the guidance of Lucas Cranach—one of Luther’s closest allies. The author ably guides the reader through the development of “Brand Luther.” Pettegree’s chapter on “Brand Luther,” including his account of Cranach’s life and work, are worth the price of the book.

Part III. Friends and Adversaries focuses on the people of the Reformation—Luther’s expanding circle of colleagues, his adversaries, and those who cut ties from the Reformation. In this section, Pettegree offers a fascinating look at the publication of the German Bible in its various parts during Luther’s lifetime. What makes this particularly interesting is the manner in which the printing industry developed to take the lengthy text of Holy Scripture and make it not only accessible to the general public, but also affordable.

As Pettegree focuses on those who followed Luther, he provides the reader a helpful examination of the development of the Reformation beyond Saxony and a closer look at those who stood opposed to Luther and the Reformation. He helps the reader to understand the difficulties that Roman Catholic writers had with getting their writings published not only in pro-Luther lands, but even in Roman Catholic lands, where often there was little demand for their works.

This reviewer was a little surprised at the conclusions and criticisms made in “Partings”—the chapter on the partings of those who had initially embraced the Reformation. In examining Luther’s interactions with Erasmus, Pettegree tended to side with Erasmus and spoke critically of Luther’s Bondage of the Will. In his examination of the Peasants’ Revolt and elsewhere2, Pettegree openly wonders if Luther later regretted his early statements about the “priesthood of all believers.” Pettegree also criticizes Luther for refusing to compromise with Zwingli and the Swiss Reformers at and after the Marburg Colloquy. In spite of these criticisms, Pettegree does provide a unique perspective on these particular events in the life of Luther and the Reformation.

Part IV. Building the Church focuses on the challenges that Luther and the Reformers faced spreading and establishing the Reformation. Pettegree provides a helpful glimpse not only into the Luther home, but into Luther’s view of marriage and fatherhood, which also impacted Luther’s emphasis on Christian education, the development of the Catechisms, and his call for an educated citizenry.

This section also includes a look at Luther’s last years. Any examination of Luther’s last years should cause the reader to wince. Luther’s declining health, his frustrations, and the growing threats of attack show themselves throughout Luther’s writings from this time. Pettegree provides a realistic, “warts and all” view of Luther during the final years of his life, and that is okay. It is better for Lutherans to understand the real Luther, which leads us to even greater appreciation for what our God accomplished through him and the Reformation, than to hang our heritage on a romanticized myth that makes Luther nothing more than a patron saint.

Brand Luther concludes with a final look at Luther’s legacy both in the Lutheran church and his long-term impact on the printing industry. The reader will find a wealth of resources for further study in Pettegree’s endnotes. This reviewer appreciated the fact that Pettegree cites some of the best Reformation scholars in conservative Christian and confessional Lutheran circles.

In the course of reading Brand Luther, the reader will realize that this book was published by a secular publisher for a secular audience—and that becomes evident in some of Pettegree’s conclusions. Lutheran readers will likely wish that the author would go one step further and attribute what took place in Reformation history or in Luther’s life as more than improbable luck, but rather God’s guidance of history for the benefit of his Church. Nevertheless, Brand Luther is one of the best and most accessible contributions to Luther scholarship in recent memory. This reviewer strongly recommends that Brand Luther find a place not only in the libraries of our busy pastors, but also as recommended reading in our church libraries.

1 Quoted from Dr. Wade Johnston’s brief review of Brand Luther in the September 2017 edition of the Four Branches Review. This reviewer found Dr. Johnston’s article to be beneficial. https://www.wls.wels.net/four-branches-september-2017/#Historical

PreviousCandidates Assigned
Next Four Branches – May 2020