A Lutheran Looks at Baptists

A Lutheran Looks at Baptists 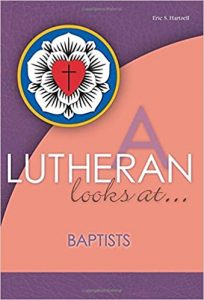 Eric Hartzell is a 1976 graduate of Wisconsin Lutheran Seminary. He spent six years serving as a missionary in Zambia, Africa. He also served as a pastor in East Fork, AZ and Georgetown, TX.

Baptists are the second largest Christian church body in the United States of America, second only to the Roman Catholic Church. Baptists are the largest Protestant church body, making up approximately 15% of the United States population. This means that Lutheran pastors, teachers, and laypeople will likely encounter Baptists at work, in the gym, around the neighborhood, or at parties. As Lutherans endeavor to “speak the truth in love” (Ephesians 4:15) to their Baptist friends and neighbors, an understanding of Baptist theology will aid those conversations. Eric Hartzell wrote A Lutheran Looks at Baptists to help Lutherans better understand Baptist beliefs.

Hartzell begins by examining the beginnings of the Baptist church, which is a somewhat murky history due to competing theories on when Baptist beliefs first started. Some Baptists claim that Adam, the first man, was also the first Baptist. Others trace their beginnings back to John the Baptist. Hartzell favors the idea of modern Baptists having their roots in the Anabaptists of Reformation times (3), which seems to be the most likely explanation.

Hartzell then dives into the various Baptist churches in the United States. There are several Baptist conventions (what we would call “synods”) with much overlap of belief between the conventions. This leads to one issue with studying the Baptist church, which is that “it is not easy to determine exactly how one group differs from another” (6). Another issue is that some conventions are more Arminian in their beliefs while others have a stronger flavor of Calvinism in their teachings, with most having a mix of Arminian and Calvinist teachings. Hartzell, along with most pastors, wonders how this makes sense, but it doesn’t seem to bother Baptists.

After briefly overviewing the main Baptist conventions, Hartzell addresses Baptist creeds and beliefs. Baptist creeds are easy to study – there really aren’t any! In fact, the Baptist church “prides itself on not being confessional or creedal” (20). Hartzell’s study leads him to conclude that “the Baptist creed is to have no creed” (21). Naturally, this leads to a great diversity of teaching among Baptists, which means it is difficult to succinctly summarize and dissect Baptist teachings.

Despite this challenge of Baptists having perhaps the most diversity of teaching among Christian churches (25), Hartzell finds the most commonly held Baptist beliefs in official “statements of faith” from the largest Baptist conventions. (Lutherans would call these statements of faith “creeds,” but Baptists do not.) Using these statements of faith, the rest of A Lutheran Looks at Baptists highlights the differences between Baptists and Lutherans. The biggest differences include teachings on Scripture, the triune God, conversion, the sacraments, faith, and good works.

Baptists and Lutherans agree on the verbal inspiration of Scripture (27), but Baptists follow John Calvin’s preference of putting human reason alongside Scripture, rather than making reason captive to the Word of God (30). The doctrine of conversion also shows divergent beliefs between Lutherans and Baptists.  Baptists stress man’s cooperation in conversion (37) while Lutherans follow the Scriptural teaching that man is dead in sin and unable to participate in conversion (35). Hartzell highlights several other differences between Lutherans and Baptists, including the manner of baptism (42), infant baptism (44ff), the Real Presence (49), and whether or not prayer is a means of grace (63).

Perhaps the biggest difference between Baptists and Lutherans is found in this question: “What does God do for man and what does man do for God?” Lutherans believe that conversion, baptism, and the Lord’s Supper are pure gospel and things God does for man, but Baptists think differently. According to Baptists, man does something good for God when he accepts Jesus as his Savior (36), when he gets baptized as an act of obedience to God (41), or when he “memorializes the death of the Redeemer” by partaking of the Lord’s Supper (51).

Hartzell writes clearly and shows differences between Baptist and Lutheran doctrines. However, A Lutheran Looks at Baptists is not a diatribe against Baptists. Hartzell writes with an evangelical spirit which never mocks Baptists for straying from Scripture, but rather informs his readers about differences in beliefs. Hartzell’s loving spirit is especially evident as he rejoices in the many areas of common belief among Lutherans and Baptists. This joy is most notable in the chapter on marriage and family life (53ff), where Hartzell points out the many teachings Baptists and Lutherans agree on in that arena.

One possible negative of this book is that differences among Baptists can lead to confusion, a primary example being the topics of conversion (34ff) and good works (58ff). This is due to the wide array of beliefs among Baptist churches, not to Hartzell’s unclear writing. On the contrary, he points out well these sometimes incongruous beliefs while acknowledging that even Baptists notice these differences. A notable example is found when Baptists’ Arminian and Calvinist roots clash over the doctrine of conversion (37).

Overall, A Lutheran Looks at Baptists will be a helpful book to have in a church library or on a pastor’s shelf. It is easy to read and understand, and both clergy and laypeople will benefit from reading it. Not including a lengthy addendum, A Lutheran Looks at Baptists is only 78 pages long. One could easily read it in an afternoon and be more prepared to understand and evangelize the Baptists in one’s life. Hartzell also includes a practical approach to discussing theology with one’s Baptist friend or neighbor (71ff), and all Lutherans will benefit from his useful suggestions. While the entire book is informative, these practical tips are most helpful for immediate use in both public and personal ministries. This reviewer recommends A Lutheran Looks at Baptists to any Lutheran who interacts with Baptists.

PreviousFour Branches – May 2020
Next Watch Yourself and Your Doctrine Closely